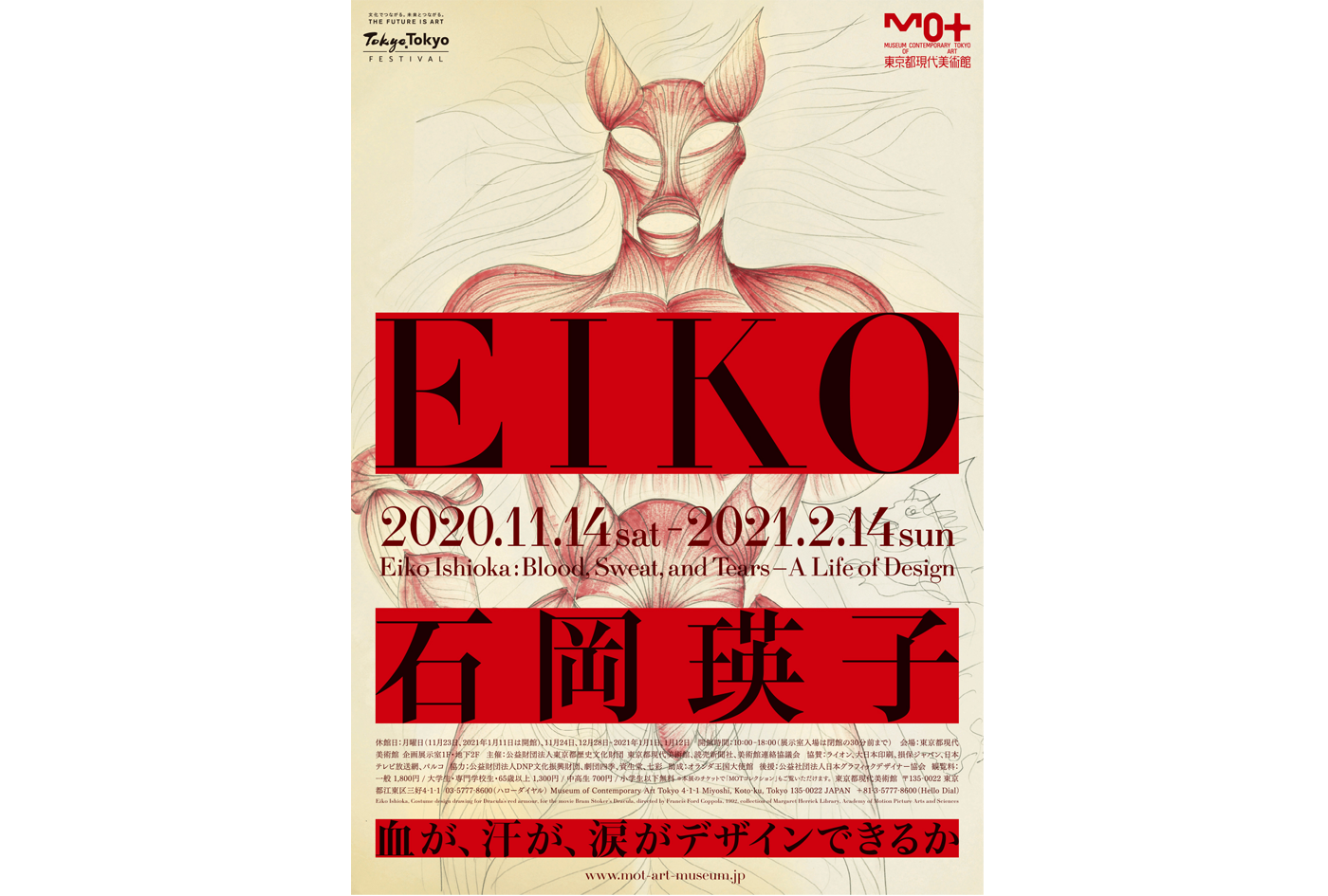 Eiko Ishioka: Blood, Sweat, and Tears — A Life of Design is being held at the Museum of Contemporary Art TOKYO. It’s the world’s first large-scale retrospective exhibition dedicated to Eiko Ishioka (1938-2012), an internationally renowned art director and designer who ignited with her work a new era in various fields including advertising, theater, movie, and graphic design.
The most important point among the many highlights of this exhibition is that Ms. Ishioka’s dynamism and way of living as a person that expresses herself, which can be seen through her wonderful carrier and works, will be a powerful message for us living in the present. The steps she has taken to carry out without hesitation and evolve what she was able to do in Japan and the world, reminds us that we have potential within ourselves as well.

An amazing adventure trip from Japan to the world
Ms. Eiko Ishioka’s world’s first large-scale retrospective exhibition consists of three sections that follow in chronological order. You’ll feel like you’re watching a designer’s “An adventure trip” as the power of her creations, not only early days in Japan, but also after her global expansion, keeps to break new ground and cross boundaries and grow in scale over time.
The first section, “Timeless: Designing the Times” focuses on advertising graphic works from the 60s and 70s, among others. Nowadays, advertising graphics can be emulated in any number of ways, such as intricate gradients and watermarks on a computer screen, but all of this is done with craftsmanship, and the work conveys the tension that existed when many trials were not possible. But even if you don’t know about that era, you can purely enjoy a strong message.

In the following “Fearless: Designing Encounters”, you will see a variety of works that has taken her out into the world since the beginning of the 80s and extended beyond advertising to the stage and movie, Broadway and Hollywood entertainment. It’s amazing how she challenges her inexperienced work, meets world-renowned people, and evenly competes with them to assert her personality and identity.

The last one, “Borderless: Designing the Future” consists of works from a mature period in which its personality has evolved even further, with the addition of different stages such as the opera, circus, and opening ceremony of the Olympic Games, which have become even more brilliant.
In each section, you will experience the theme of “Timeless, Original, Revolutionary,” said to be the basis of Ms. Ishioka’s design, and you will know that the “An adventure trip” had a clear destination.

Intense message sent through characters
Ms. Ishioka’s work, from her early advertising graphics to last costume design, always conveys a simple and powerful message. I think that a character is the “storyteller” and sometimes her own alter ego.
Ms. Ishioka says, “The character who can express what I want, will be African or Indian or a New York actress, depending on the storytelling style”. Parco’s series of works proves that, and is often reflected in the cast message that breaks the stereotypes of the audience.

She expanded such method and scaled it up to the field of stage and movie costumes more and more by going out into the world in the 80s. In particular, Dracula’s costume design was innovative, breaking away from the traditional and frightening image. It is said that Ms. Ishioka tried to sculpt Dracula as a multifaceted and “kaleidoscopic” character through his costumes, which are truly dubious, like the stage costumes of a rock star with a variety of inner refractions and conflicts.

We can also feel how important it was for Ms. Ishioka to set up the character as a storyteller of messages when we see an exhibition of 64 drawings that she faxed with several ideas about the main characters in the early stages of the movie “The Cell”.
When you see these magnificent movie costumes gathered here from all over the world one by one, feeling her message, you will understand the essence of Ms. Ishioka’s design, which was titled “Blood, Sweat, and Tears — A Life of Design (i.e., can you design emotions?).

The power of words to move collaborators
This exhibition delves into the process of her design through collaboration, and this is a very interesting point. This is because there is a difference between an artist who can complete his/her work by oneself and a designer who can mobilize others to help him/her reach his/her desired point of expression.

When seeing this process, we are amazed at the power of Ms. Ishioka’s words, which are concrete and compelling. For example, at the entrance of the venue, a 20-minute long interview with Ms. Ishioka is played, and we will be riveted to the soundtrack before entering the main venue, as the poignant words will come out one after another. In fact, we can listen to this audio as we enter the main venue and still have it playing like background music.
The words that accompany the ideas and drawings presented to clients and collaborators around the world, beginning with instructions for printers (platemaking) and production staff as seen in the early days of Shiseido, is concise and detailed. In particular, Miles Davis’ record jacket TUTU reminds us of the inspirational words and thrilling communications between the famously dour Miles in Ms. Ishioka’s autobiography “I Design” (Kodansha,2005).

If it’s an artist’s exhibition, you will often see it without any prior knowledge and enjoy it as you feel it. However, an exhibition of designers like Ms. Ishioka is even more enjoyable when you understand the process that moved collaborators and try to recreate it in your mind. You’ll need at least one hour for one section as you see while recreating the process. Therefore, we recommend that you come to the exhibition with plenty of time, take a break along the way, and enjoy watching, thinking, and being impressed.