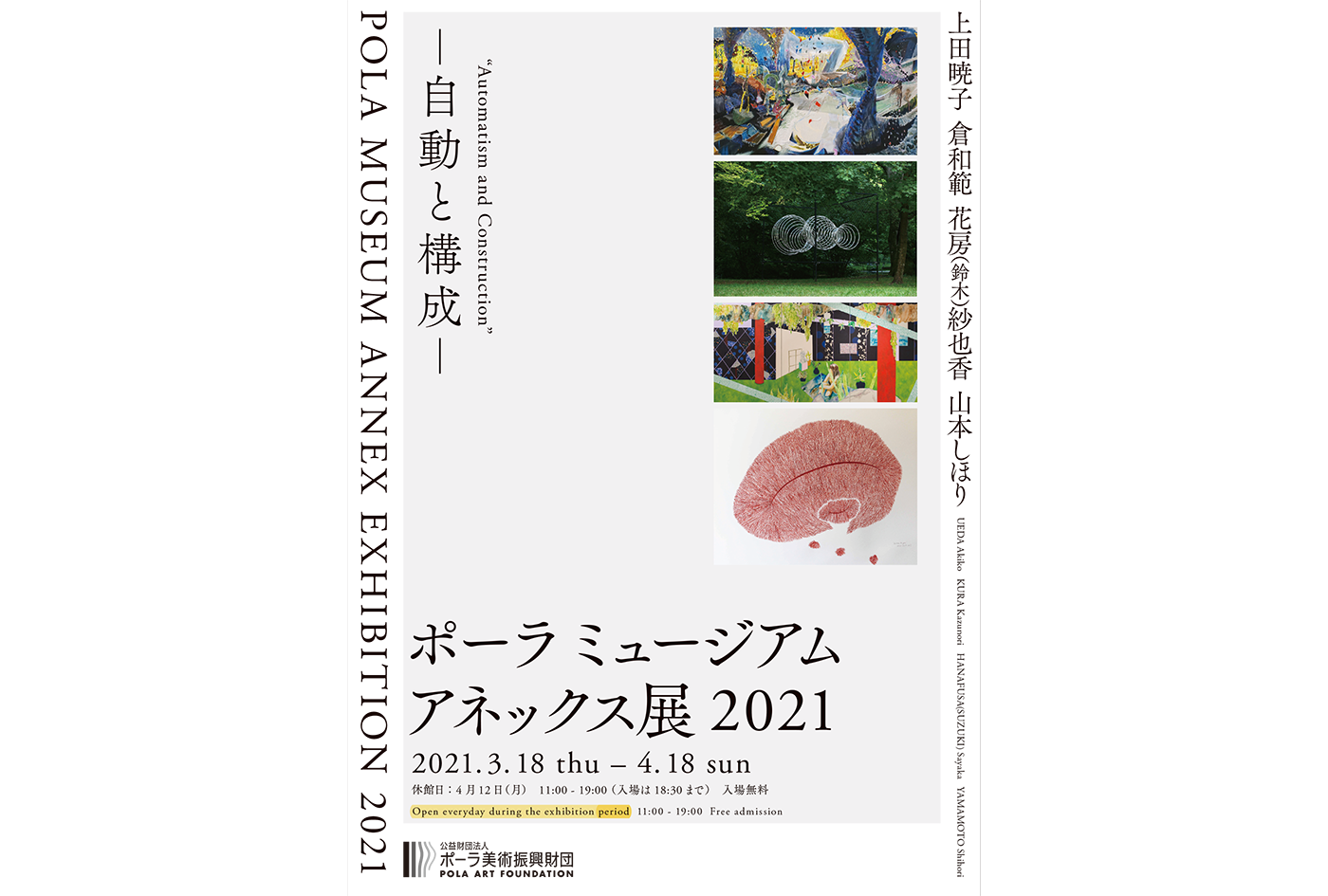 The “Pola Museum Annex Exhibition” introduces the works of artists who have trained abroad. The theme of this year’s exhibition, taking place in the second half of 2021, is “Automatism and Construction,” where visitors will be able to encounter the works of four dynamic and talented artists.
For artists, training abroad may give them a more stimulating and understanding creative environment, as well as the opportunity to analyze themselves and develop new perspectives and ideas. One of the pleasures of being part of an audience is to find the results of these experiences in their work.

Outline
The Pola Art Foundation has long been developing initiatives to support overseas training for young artists between the ages of 20 and 35 and to encourage more active creative activities as part of one of its grant programs. This year’s 19th POLA MUSEUM ANNEX presents works by artists who have received training overseas through this grant. Under the supervision of Pola Museum of Art Director Shunsuke Kijima, a total of eight artists will be introduced in the first and second halves of the exhibition. “Automatism and Construction” marks the second half of the exhibition.

According to a quote by Director Kijima on the flyer, the works in the exhibition were not necessarily faithfully selected according to the theme of “Automatism and Construction.” He goes on to say that automatism and construction are not treated as separate genres, but that “there is construction within automatism and automatism within construction.”
If I am correct in my understanding that “automatism” is an attempt to remove the control of reason and express an image of the conscious mind, and “construction” the opposite concept, then the works and creative attitudes of these four artists seem to show a fine balance of both. You may find the theme of “Automatism and Construction” abstract, but these important keywords will lead you to the most significant features of the work.

Akiko Ueda
Akiko Ueda is based in Brussels, Belgium. According to Ueda’s own official website, Her paintings explore how to be a medium to capture the process and moment of a certain phenomenon transforming, and the causes of such change, instead of painting as reproduction or representation. Painting is thinking; and for Ueda it means to find out and evolve the subject out of the painting’s process as well as from imaginative force stirred by brushwork.

Kazunori Kura
After working as a graphic/web designer, Kazunori Kura has been developing his creative activities since around 2011. According to Kura’s own official website, Until now Kura produced his works while thinking about the energy, the power to believe. All of his current works show the paths he is going through while thinking about that. In order to reflect the thought processes, Kura uses different materials, techniques, and methods for each work.

Sayaka Hanafusa (Suzuki)
Sayaka Hanafusa (Suzuki) trained in France and is now based in Nagi-cho, Okayama Prefecture. On her official website, she states that the theme of her work is “inside and outside.” She states that she chose the motif of a window because it enables us to see the outside world from within a house where we feel safe. The inner life of a person is complex, but it cannot be viewed from the outside, and we are left only able to see a flat surface. However, in her work, the inside and outside are depicted in the same space, creating images that give the audience an inscrutable feeling.

Shihori Yamamoto
Shihori Yamamoto lives and works in New York City. There is a rich variety of different races and cultures in America’s contemporary art scene, with a number of outstanding talents emerging and setting up business. Yamamoto’s characteristic use of red ink may have developed as a form of expression in response to finding herself within this scene as a Japanese person, and it not only gives a sense of scale but also expresses her own unique world view.