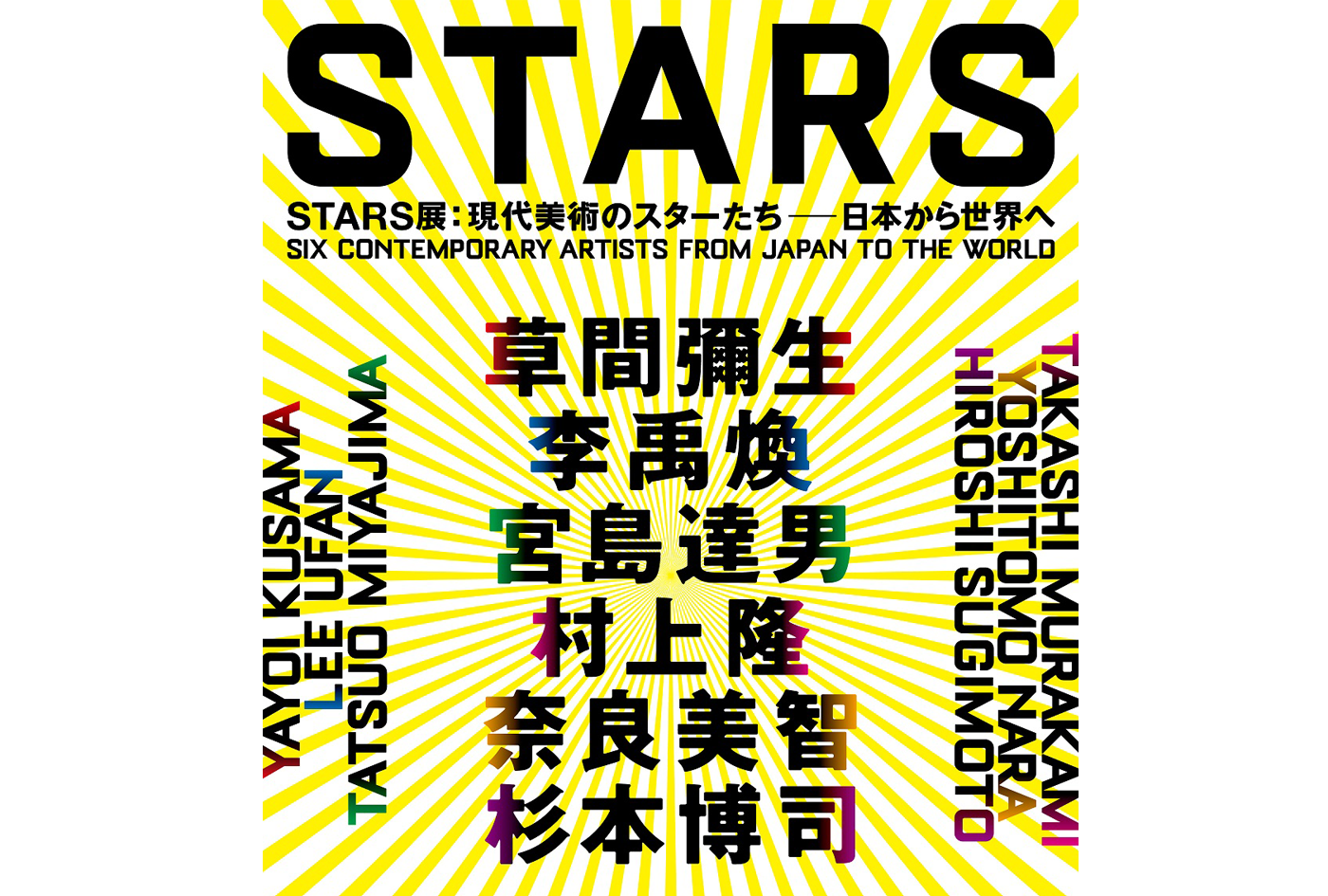 “STARS: Six Contemporary Artists from Japan to the World” is being held at the Mori Art Museum. There are many stars of Japanese contemporary art, but six artists who are highly regarded by different regions and generations around the world have been selected for this exhibition. Through their works and initiatives, this exhibition reveals the strength and current status of Japanese contemporary art.
You’ll of course be able to see the stars’ masterpieces, but you’ll also be able to view chronological tables and materials that show how the artists’ progress and initiatives have been evaluated around the world, as well as use an audio guide including interviews with the artists themselves (500 yen/English channel available). In addition, the content introduced by the director of the Mori Art Museum on the YouTube channel will make the artworks even more enjoyable (Japanese audio only / Watch with subtitles & automatic translation on YouTube).
Therefore, this exhibition will be a great “primer” for beginners to Japanese contemporary art, and a good opportunity for contemporary art enthusiasts to reunite with masterpieces. This is one of the most not-to-be-missed exhibitions this year.

You’ll find what artists have expressed over their lives.
There are many reasons to visit this exhibition, but the greatest value comes from the fact that each artist’s early debut works and latest works are displayed in the same space. In this way, we can understand at a glance what each artist has been trying to express over his or her life.
From the works we have seen in this exhibition, it appears that what the six artists have tried to express from their early days to the present is based on consistent and unwavering concepts. These works were produced and showcased between the 1950s and 2020, a period that has seen many social, economic, and cultural events. In particular, the Great East Japan Earthquake of 2011 which is still fresh in the minds of the Japanese people, caused the six artists a great deal of anguish and conflict and became an issue they had to confront.
Through their works, you will feel the strength and grace of contemporary art as you see how they have perceived this challenge, and how they have overcome and expressed themselves through their activities. Their initiatives will also be a thought-provoking message for us to look ahead in the world transformed by COVID-19.

The history of Japanese contemporary art stepping out from Japan to the world
In the middle of the route of this exhibition, you’ll find the history of the six artists and materials from 50 exhibitions of contemporary Japanese art held abroad. You may spend much more time in this interesting section than on an exhibit by a single artist.
The section introducing the activities of the six artists through the years reveals how each artist has been recognized around the world, through lists of major exhibitions in which they have participated, catalogues, photographs of exhibitions, and exhibition reviews.
In addition, valuable original materials such as exhibition photographs and criticisms of the time are introduced along with an overview of each of the 50 exhibitions introducing Japanese contemporary art held overseas since 1950. In the early days, the characteristics of Japanese contemporary art were introduced through traditional Japanese concepts such as “Ma (blank space to develop someone’s imagination, or the perfect timing to do something)”, but starting in the 2000s, subcultures such as anime appeared in these introductions. From these transitions we can see the ingenuity and hardships of how the organizers and planners tried to convey “Japan” to the public. Also, these events that were first held in Europe and the United States began to spread to China and the rest of Asia in the 2000s.
Some of the materials include articles with severe criticisms, and through these materials, we can understand how Japanese contemporary art “fought” the world and in turn, has gotten received by the world.

Follow the paths of six artists across time and space.
Let’s take a look at the highlights of each artist’s exhibition in order of appearance.

Takashi Murakami
As you can see in ink-wash painting and Ukiyo-e, differently from the West, there is a way of thinking about perspective in Japan of creating depth and beauty on a flat plane. Mr. Murakami advocates the “Superflat” theory to the world based on such Japanese senses through presenting character paintings and figure sculptures.
His latest work, “Cherry Blossom Fujiyama JAPAN”, is a large piece of art that stands 5 meters tall and about 21 meters wide, but the details are not to be missed. Also, the video work “Let’s Go See the Nuclear Reactor (2020)” is quite long at 8 minutes and 8 seconds, but it is impressive. This work is something you should take the time to watch, even if you have to take time off work to come during a less busy time on a weekday.

Lee Ufan
Only in Mr. Lee’s exhibition space, the floor is covered with white gravel. You hear the creak of the gravel with every step you take and feel the unique texture on the soles of your feet, which makes it fun to think about why the artist laid down the white gravel. Although we can’t actually enter one, it felt like stepping into a Karesansui garden at a temple in Kyoto.
The other 5 artists also have a consistent concept, but especially for Mr. Lee, the word “It-tetsu (obstinate)” comes to our minds. If you had not been told, it’s almost impossible to tell that his early works and latest works are on display together.

Yayoi Kusama
Ms. Kusama has a career spanning about 70 years, but her unchanging avant-garde and pop style always makes us feel that she is staying young.
The Yayoi Kusama Museum in the Shinjuku Ward required a reservation even before COVID-19 spread in order to limit the number of visitors that could be in the space at once. When I visited last year, I remember that the ratio of foreigners was so high that I thought I was the only Japanese among the 30 visitors. A unique enjoyment of this exhibition may be to think about what keeps impressing people around the world while appreciating everything from her early works released in 1959 to her latest work “SPLENDOR OF NUMEROUS LOVES”.

Tatsuo Miyajima
Based on the concepts of “it keeps changing”, “it connects with everything”, and “it continues forever”, Mr. Miyajima creates installations and sculptures using digital counters that display numbers.
You will be calmed by the beauty of his latest work “Sea of Time – TOHOKU Project (2020)”, even without any explanation. It looks like blood is flowing through the inorganic looking digital numbers. If you read the overview of the project which provides the background of this work in the next section, you will discover where the charm of this work comes from.

Yoshitomo Nara
There are early drawings exhibited in the introductory part of Mr. Nara’s corner, but there are also books, dolls, rock music records, and CDs displayed here that served as the starting point and basis of his creative activities. Before the Walkman (Portable Headset Stereo Player) was released in 1979, rock music like the ones on display were to be listened to in a room with your whole body facing the speakers. There were many record jackets that I didn’t recognize, but some of them were my favorites, and I was happy to find some similarities between me and Mr. Nara’s origins.
“Miss Moonlight”, which has been extremely popular on social media, is a work filled with tenderness, depicting a girl that holds both familiarity and sacredness.

Hiroshi Sugimoto
Mr. Sugimoto’s early masterpiece “Polar Bear (1976)” is a work that captures the moment when a polar bear captures a seal where life and death intersect, but apparently it is actually a photograph of a taxidermy mount exhibited at a museum. If you can think that what is dead is alive, what does “being alive” mean for you? Mr. Sugimoto seems to share his vision with others by posing this question to the people who see this photographic work.
Mr. Sugimoto’s works cover a wide range of art forms, from photography and contemporary art to architecture, traditional art and classical arts. The exhibition focuses on photographs and films, and the visualization of Sugimoto’s worldview which looks at the essence and truth of things, such as life and death or time and space, which allows you to begin to understand his whole body of works.