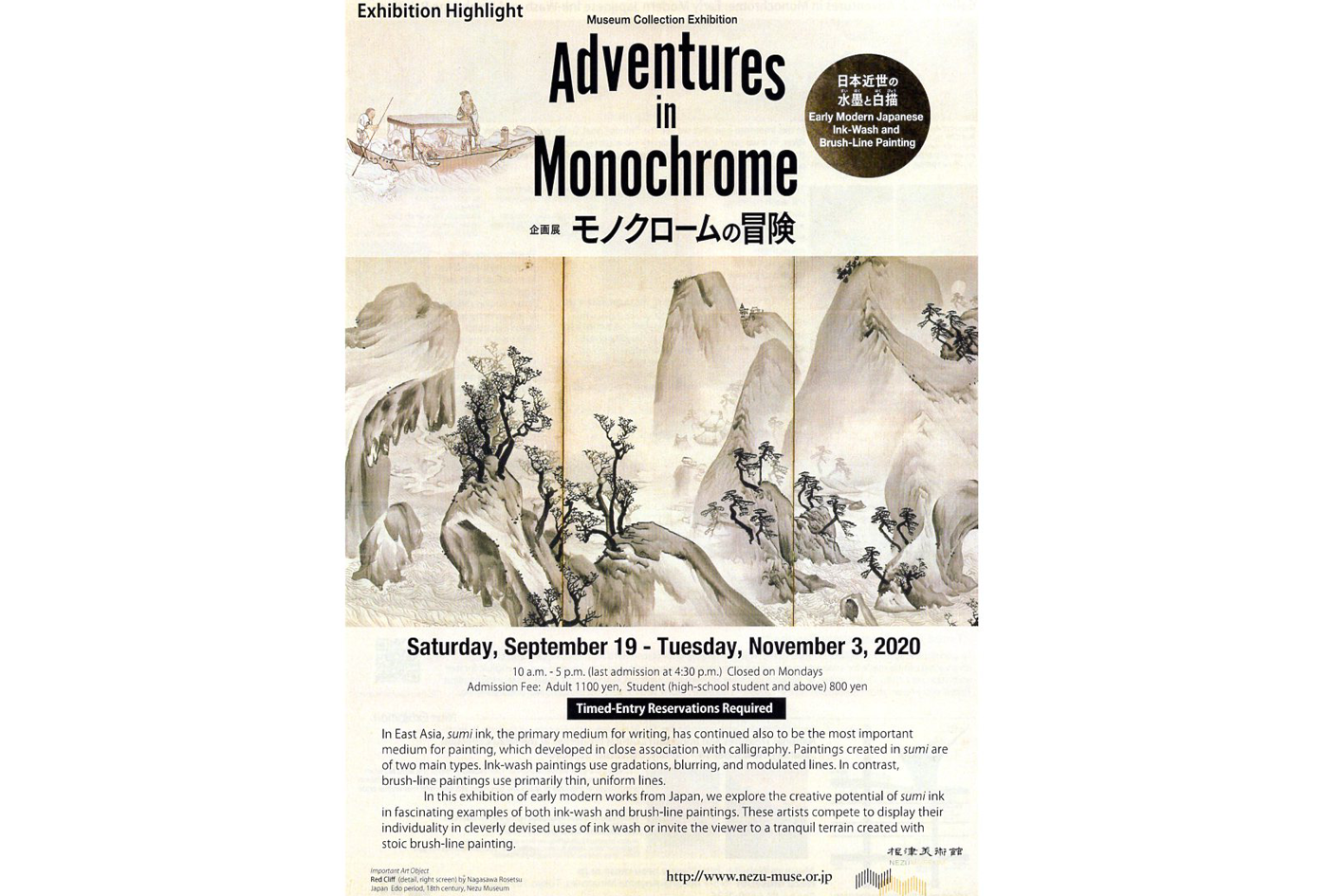 Museum collection exhibition “Adventureｓ in Monochrome – Early Modern Japanese Ink-Wash and Brush-Line Painting” is now being held at Nezu Museum in Aoyama.
In East Asia, sumi ink, the primary medium for writing, has continued also to be the most important medium for painting, which developed in close association with calligraphy. Paintings created in sumi are of 2 main types. Ink-wash paintings use gradations, blurring, and modulated lines. In contrast, brush-line paintings use primarily thin, uniform lines.
These 2 types of techniques were brought from China to Japan. Many works of brush-line painting was introduced to Japan in the Nara period (710-794), and Ink-wash painting was done from the end of the Heian period (794 – 1185/1192) through the Middle Ages (the 12th c – the 16th c / in general). Ink-wash and brush-line painting developed uniquely in Japan by the artists who were inspired by these works. The ingenuity of one artist’s creativity, which is then passed on to the next generation of artists for further innovation, is a true “Adventures in Monochrome”.
This exhibition introduces the appeal of the techniques and expressions of Ink-wash and brush-line painting, both of which have explored the possibilities of ink, through early modern works, mainly from the Edo period (1603 – 1867).
In addition, the exhibition rooms for Ink-wash and brush-line painting are separated, so you can expect to enjoy seeing them in contrast.

Ink-Wash Painting : Variety of expression in sumi(ink)
“Adventure” begins with ink-wash painting in the first exhibition room. Of the 17 works on display, 3 are from the Momoyama period (1590-1602), while the others are from the Edo period. In the Kamakura period (1185/1192-1333), works influenced by Zen culture were brought to Japan from China, and during the Muromachi period (1336-1573), the Japanese master of ink-wash painting, Sesshu appeared. The exhibited works are the Kano school, which was used as a official painter by the power lords of the time from Azuchi-Momoyama to the Edo period (the 16th c – the 19th c), and became the “mainstream”, and the Rinpa school, Maruyama Shijo school, which went on its own path. It was born in an era when those painters of Japan were active.
If you know the historical background of these works, the appreciation will be even more interesting, but even if you do not know it, you will be fascinated by the variety and power of the expression of sumi ink.

In “Red Cliff”, we savor the extraordinary ink-wash techniques of Rosetsu Nagasawa (1754-99). We see the Chinese poet Su Shi enjoying scenic spots along the Yangtze River. The composition of the painting, which mixes dynamic and static, is truly immense, from the ravines and waterfalls on the left side of the screen, to the surface of the Yangtze River with its swaying waves, to the temple and the moon on the right side.

Soga Sōan who painted “Eagle and Hawk”, suggests he was a member of the Soga school. That school, which originated in the Momoyama period, excelled at depictions of hawks.  Unlike other works, we get the gorgeous impression that is characteristic of the Momoyama period. The effective use of ink-wash painting, with its lively modulations, and the dramatic style make these depictions of an eagle and a falcon utterly eye-catching.

Brush-Line Painting : Storytelling expressed by stoic lines.
Brush-line painting is truly a world of monochrome beauty, with black ink strokes on white paper. Of the nine works exhibited in the exhibition room, two are from the Taisho and Showa eras (1912-1989), but the rest are from the Edo period. One of the masterpieces of brush-line painting is “Choju-jinbutsu-giga (Animal-person Caricatures / Heian period)”, but you can also see a reproduction of the Edo period in this exhibition.
The works of the Tosa school, Sumiyoshi school, and the retro Yamato-e school, which are expressed in a stoic brush-line painting with uniform lines as a whole, sometimes add pale colors, invite the viewer to a tranquil mind.

Brush-line painting goes well with Yamato-e, which elegantly depicts the scenery of the four seasons, as well as people’s lives and stories, and was developed in picture scrolls and illustrations. “Scenes from The Tale of Genji” is a typical example, poem cards depicting famous scenes from The Tale of Genji that have been made into an album. This work is attributed to Sumiyoshi Gukei (1631-1705), a Yamato-e painter of the Edo period, whose dense and fine ink lines create a world of stories on small screens.

“Enjoying the Cool in Summer” is a work by Reizei Tametaka (1823-64) of the retro Yamato-e school, which was originally a series of 12-month events and landscapes in June. The three people cooling off in the Izumiden (fountain), depicted in homogeneous black lines that give the work fluidity and nuance, have realistic expressions and gestures, allowing the viewer’s imagination to expand into the relationship between the three and the content of their conversations.

A unique art experience : The meaning of seeing ink-wash and brush-line painting in pairs.

Early Modern Japanese ink-wash and brush-line painting are presented in pairs, so the impressions you get from each will be different and your art experience will be more meaningful.

Ink-wash paintings are drawn using the materials “water” and “sumi(ink)”, and you will feel the presence and flow of water in each piece of work. When we look at the techniques such as “Tarashikomi(blurred lines)” and “Hatsuboku(splashed-ink)” introduced in the caption of this exhibition, it seems to us that what the artists inherited, their ingenuity, and something like the atmosphere and thoughts of the Edo period are alive and  vibrant.

On the other hand, brush-line painting realistically depicts the situation setting of the story and the facial expressions and gestures of the person. This increases the value of the work as “information” that allows us to read about the time period and lifestyle, and we can use that “information” as an entry point into the story depicted.

Thus, this exhibition is an “adventure in monochrome” for the viewer that allows to travel through the mind of an early modern Japanese. And the intellectual excitement of this adventure will be comfortably calmed down by taking a walk after appreciation in this museum’s garden where autumn is approaching. This will be memorable as a fertile art experience unique to this Nezu Museum.