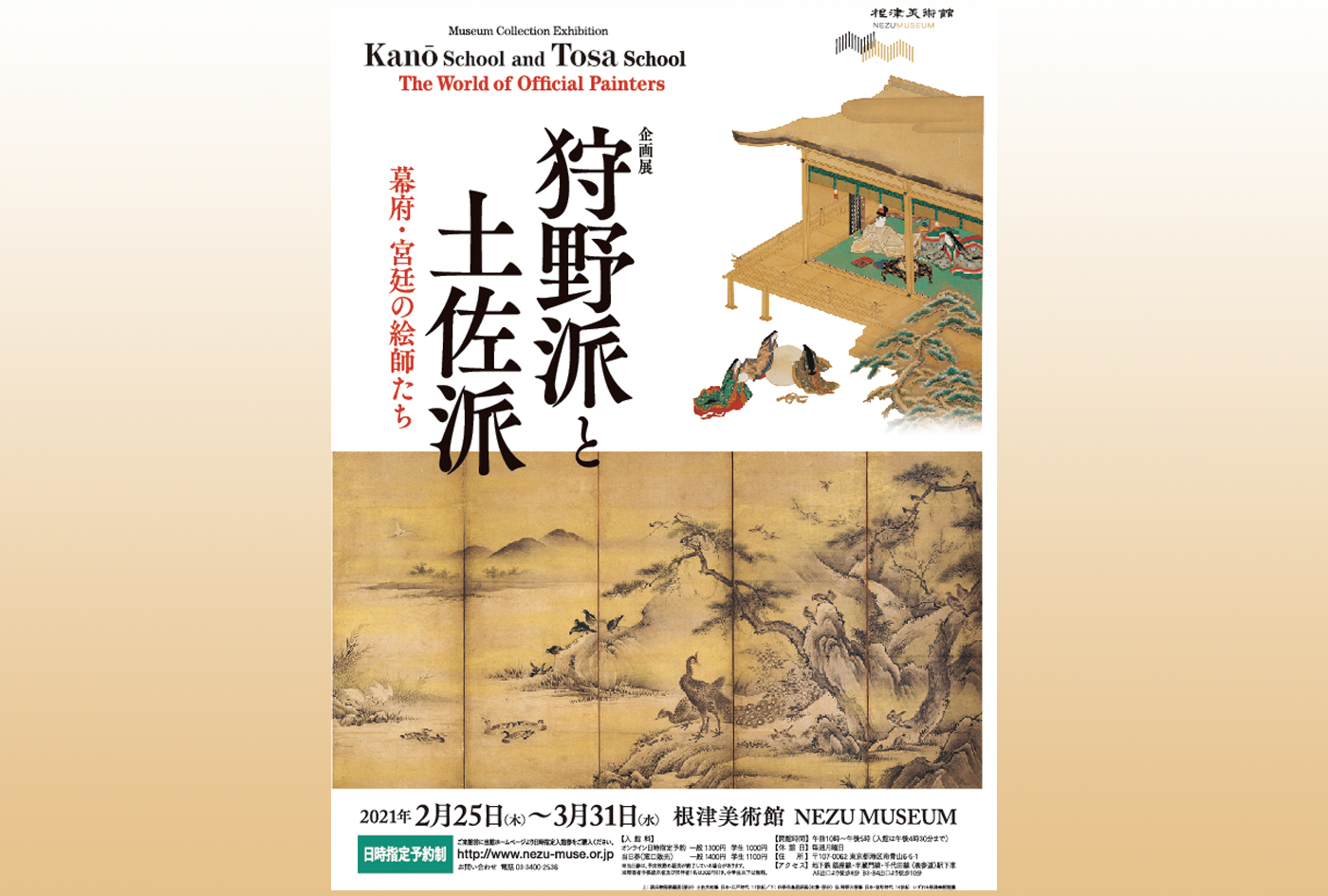 The Kanō School and the Tosa School are two major schools of Japanese painting that served as official painters for the imperial court and the shogunate. In general, the Kanō school has a flamboyant and opulent image in which the samurai show off their power, while the Tosa school cherishes the atmosphere of traditional Yamato-e and recalls an elegant style. In this exhibition, you will be able to enjoy the masterpieces of these two major schools along with the flow of history.

There are also small changes within each school depending on the time period and the painter, and finding them in this exhibition will be a source of pleasure for you.

Later, Kanō Eitoku won the hearts and minds of the power lords at the time with his strong painting style, and then came Kanō Tanyu and Kanō Sanraku, who remained active even after the political center shifted from Kyoto and Osaka to Edo. The Kanō school began with Ashikaga Yoshimasa, and ruled over the art world in Japan as the official painters for successive shoguns, Oda, Toyotomi, and Tokugawa.

On the other hand, the Tosa school is a group of Yamato-e painters, which is a traditional Japanese painting style. Tosa Mitsunobu (1434? – 1525), who appeared at the same time as Kanō Masanobu, was active and gained fame. Later, the head of the Tosa school was killed in battle and other misfortunes almost broke up the school. However, thanks to the patronage of the emperor of the time and the appearance of Tosa Mitsuoki, who is said to have revived the Tosa School in the early Edo period, it made a successful comeback as a school of court painters.

These two groups of leading Japanese painters gained the backing of the shogunate, the court, and other powerful people of the time, expanding their influence and rising to the top of the art world.

Masanobu(1434-1530),founder of the Kanō school, is believed to have studied with artists by appointment to the Ashikaga shogunate. It is also highly that he studied with the Tosa school. His quite waried oeuvre includes not only ink wash paintings but also portraits and Buddhist paintings. While it is difficult to attribute this painting to Masanobu’s own hand, it is a valuable example of a waterfall viewing painting by an early Kanō school painter.

Birds and Flowers in the Four Seasons

This pair of folding screens, with a variety of birds and flowers arranged in a space with a profound sense of depth, is attributed to Kanō Motonobu (1476?-1559). The lucid compositions and painting techniques that Motonobu established were well received by the men then in power, enabling the Kanō school to conquer the world of art.

Scene from the “Asagao” Chapter of The Tale of Genji

The artist Tosa Mitsuoki (1617-1691) fostered a revival of the Tosa school by incorporating new styles in traditional Yamato-e paintings. For the first time in eighty-five years, a Tosa school artist became the head painter in the imperial court’s official painting atelier. This painting, in which he has depicted a famous scene from The Tale of Genji, displays the gorgeous colors and detailed depiction that define Mitsuoki’s superb artistic abilities.

Yukihide, who became the head painter in the imperial court’s official painting atelier in 1413, was one of the leading Yamato-e painters in the mid-Muromachi period. This magnificent painting, with the subject depicted down to fine details, lacks a signature or seal, but it is viewed as by Yukihide or a member of his circle.

Through handscrolls presenting two otogi-zoshi, popular tales, from the Muromachi period(1336-1573), we can follow the plots of these bizarre tales while enjoying the simple, charming paintings.

March 3 is the date of the Hina Doll Festival, with its wishes that girls will grow up healthy and prosperous. We have assenmbled a group of tea utensils that are associated with this cheerful annual event.