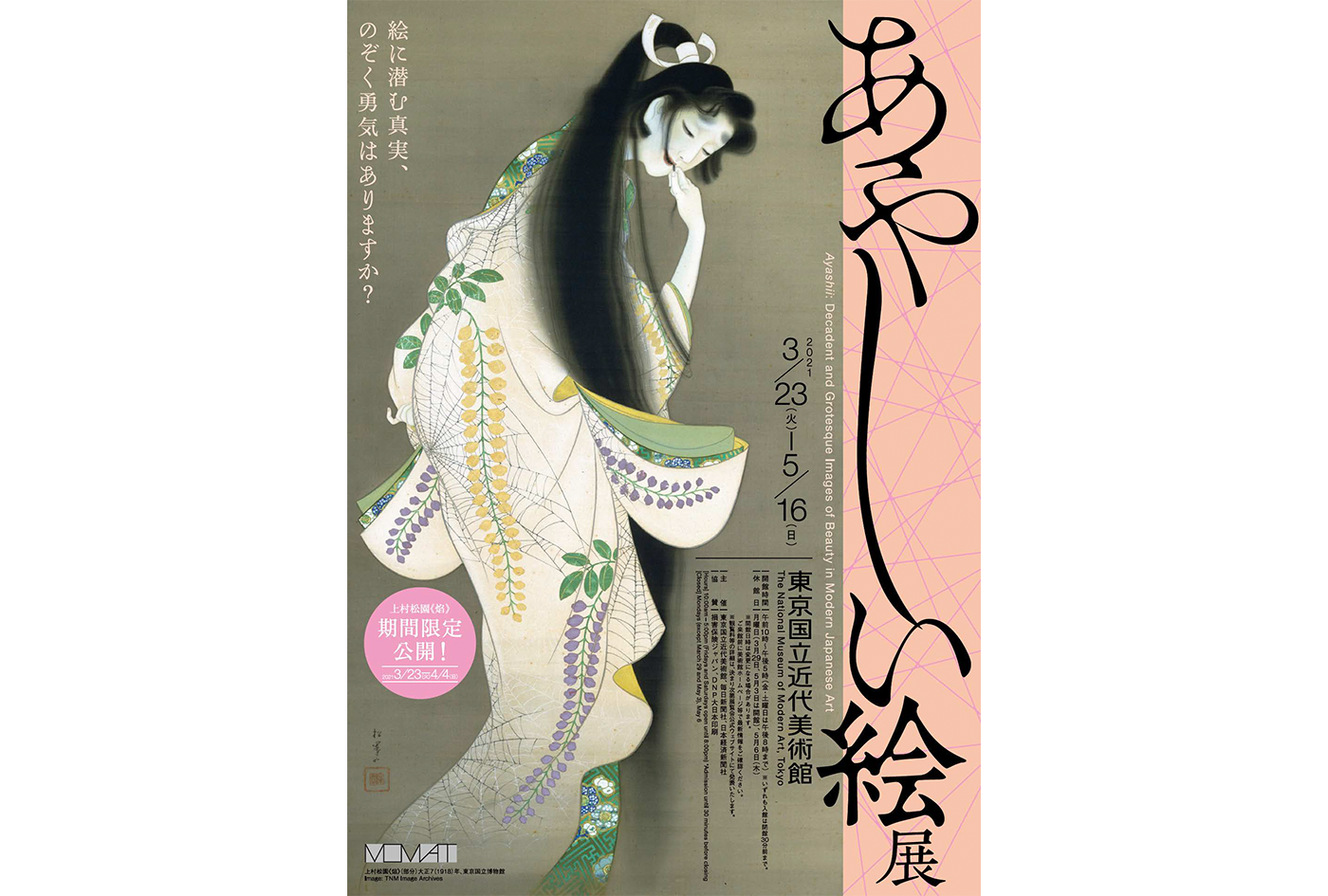 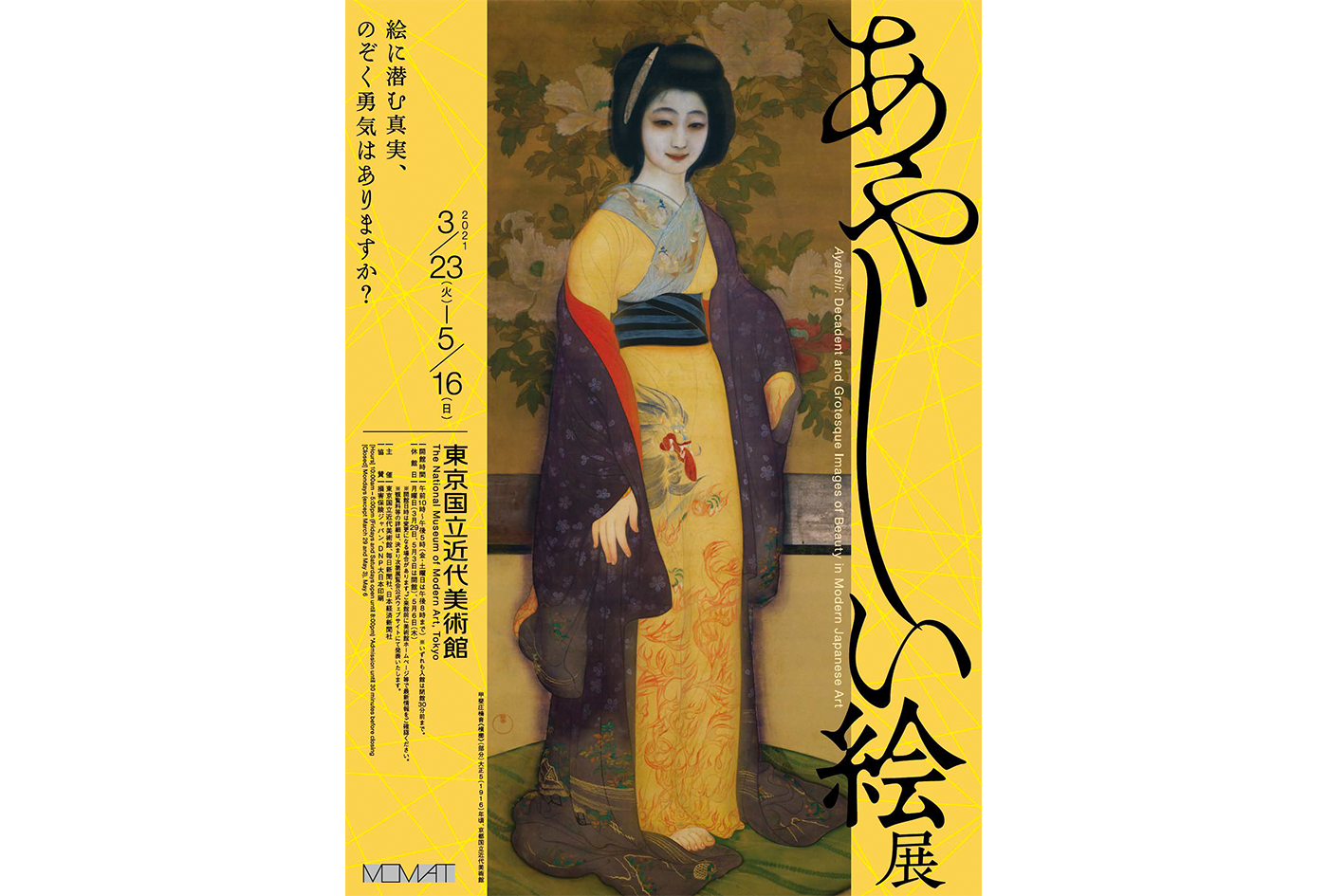 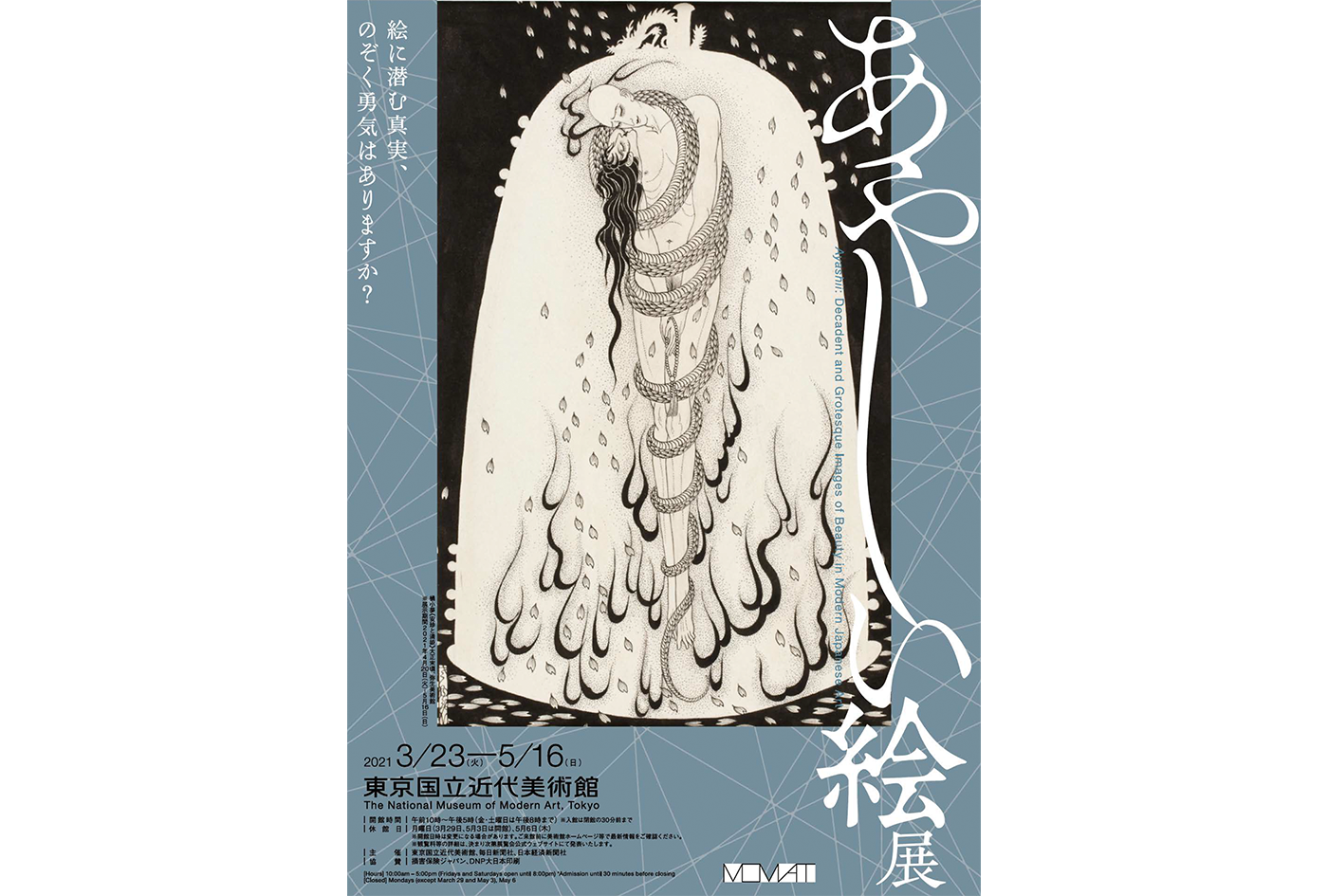 People are attracted to works that are not only beautiful but also have an “Ayashii (mysterious, strange)” appeal, including expressions such as decadence, sensuousness, grotesqueness, and eroticism. A unique exhibition is held at the National Museum of Modern Art, Tokyo, to discover where the fascination comes from and reveal the “Ayashii” secrets hidden in each work.
This exhibition features masterpieces full of “Ayashii” appeal, such as paintings, prints, and illustrations for magazines and books produced from the end of the Edo period to the beginning of the Showa period (c. from 1830 to 1930). If you immerse yourself in the unique worldview of these works, imagining in your mind the historical background in which they were created, you may find a point of contact with those of us who live today.

The intense energy that was born and demanded in times of ever-changing and disorder.
From the end of the Edo period to the beginning of the Showa period, the country’s politics, economy, and society changed drastically. The government imported technology from the West to make the country wealthy and robust, and at the same time, brought in ideas of freedom and equality. On the other hand, most of the citizens wore traditional kimonos and were confused by the gap between the old values in their minds. These historical backgrounds have always attracted the interest and sympathy of Japanese people living in the rapidly changing world of today, and the manga “Demon Slayer (Kimetsu no Yaiba)” has recently brought renewed attention to this issue.

In this exhibition, you can see representative works related to these themes, such as “Ayasii,” among the works born in such times.
Also, the main works have captions that explain what is “Ayashii” in this picture, the story depicted in the works and the origin of the works. If you enjoy the works while referring to captions, you will find yourself immersed in the unique worldview created from the end of the Edo period to the early Showa period.

The various desires and aspirations that lie behind “Ayashii“
The first section, “Love and Agony – Revealing One’s Inner Feeling,” introduces works that do not express the joy of love as it is, but rather express the feelings hidden inside the heart through the entwining flowers and plants and the meaningful gestures and glances of the characters. The woman depicted in Takeji Fujishima’s “Lady with Morning Glories” looks like a modern face, and when you look at the work, you are almost drawn in by her dark eyes.

In the “On the Threshold between the Netherworld” section, you will find works featuring mermaids, stories, and legends such as “Anchin and Kiyohime” and “Koya Hijiri.” These works are awe-inspiring in that they depict men who are captivated by a seductive charm that makes them lose their reason.

The following section, Resistance against Superficial “Beauty, “ introduces works that have become visible since the latter half of the Meiji era, which do not simply depict women’s external beauty. While some of these works are grotesquely graphic and focus on daily life’s realities, such as exhaustion and sorrow over low social status, others are idealistic about women.

In the “Devotion and Insanity” section, you will find various works from tales, Kabuki, Joruri, and illustrations from novels created during this period, all of which depict spectacular scenes when a character’s single-minded emotion turns into madness. These works convey a beautiful and passion on the verge of insanity.