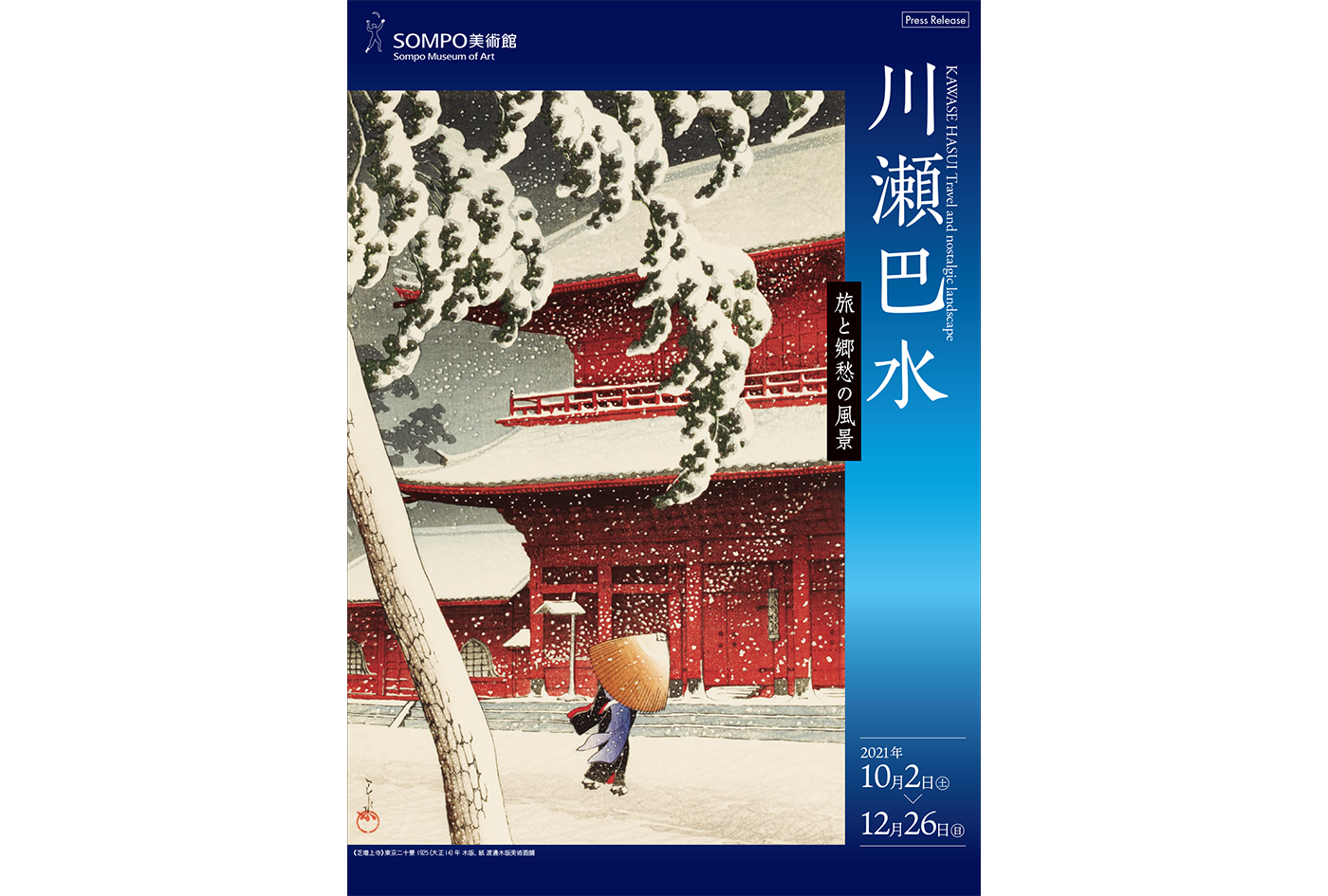 The Sompo Museum of Art is holding a retrospective exhibition of Kawase Hasui (1883-1957), a woodblock print artist active from the Taisho to Showa period (approximately 1920-1940) who was known as a “traveling poet” for his paintings of travel and nostalgic landscapes.
This exhibition features approximately 280 carefully selected landscape woodblock prints from his early to late years, focusing on a series of works that are rarely seen together.
You will surely be fascinated by the unique beauty and worldview that has been pursued by Shozaburo Watanabe, the publisher who advocated shin-hanga (“new print”), which became highly acclaimed in recent years.

A Deep Impression on the Nostalgic Charm of Shin-Hanga
Ukiyo-e, which developed as an entertainment for the masses during the Edo period (1603-1868), began to decline in the Meiji period (1868-1912), pushed by lithography, copperplate engraving, and photography.
Concerned about this situation, the publisher Shozaburo Watanabe advocated the shin-hanga concept, aiming to revive the traditional woodblock printing technique that involves the painter, engraver, and printer and popularize the prints.

Shin-hanga emphasizes the individuality of the painter and enhances one’s artistic quality, respecting first and foremost an expression that can only be produced by woodblock printing. In addition, the light colors are overlaid with many layers of color plates to create a deep color tone and a profound atmosphere.
More than anything else, for us, the slightly familiar scenery of the Taisho and Showa period invites more nostalgia than ukiyo-e of the Edo period, which is only seen in movies.

Going on a Past Trip with Kawase Hasui to Tokyo, Japan
Kawase’s style is said to have changed dramatically before and after the Great Kanto Earthquake of 1923. His works introduced in Chapter 1 consist of the period when he met Shozaburo Watanabe while studying under Kiyokata Kaburaki, became a landscape painter using woodblock prints, and suffered from the damage of the Great Kanto Earthquake. In these works, we can see a lot of designs that are relatively simplistic.
After the Great Kanto Earthquake, he tends to emphasize the brightness and vividness of colors more than before. The second chapter introduces his works from the period when he became more of a realist with precision, highly acclaimed at exhibitions in Japan and abroad.

Most of Kawase’s woodblock prints are a series of landscapes he drew in his hometown of Tokyo and on his travels. In this exhibition, most, if not all, of his exemplary series are displayed. One of the most appealing aspects of the series is that you can feel as if you are traveling around Japan with Kawase.

The Bond Between Kawase’s Woodblock Prints and a Famous American Innovator
In Chapter 3, the appeal of woodblock printing is introduced from various angles. We will be seeing Kawase’s sketchbooks, the woodblocks he used to create his prints, and some documentary footage of him at work, along with an explanation of the woodblock printing process.

Also, don’t miss the special corner that introduces how Steve Jobs (1955-2011), the famous co-founder of Apple, was fascinated by the simple beauty of Kawase’s woodblock prints from his youth.
The iPhone was the catalyst for the popularization of smartphones, which are now indispensable to our lives as information and communication tools. In developing the iPhone, Jobs has reportedly given instructions for not only the external design but also for the internal components and wiring to be simple and beautiful. We can see the similarities with Kawase’s woodblock prints and be amazed at the influence they may have had on him.

Why not enjoy traveling among the woodblock prints of Hasui Kawase?

The introduction video of the first chapter of this exhibition is now available (in Japanese only). Please check it out.