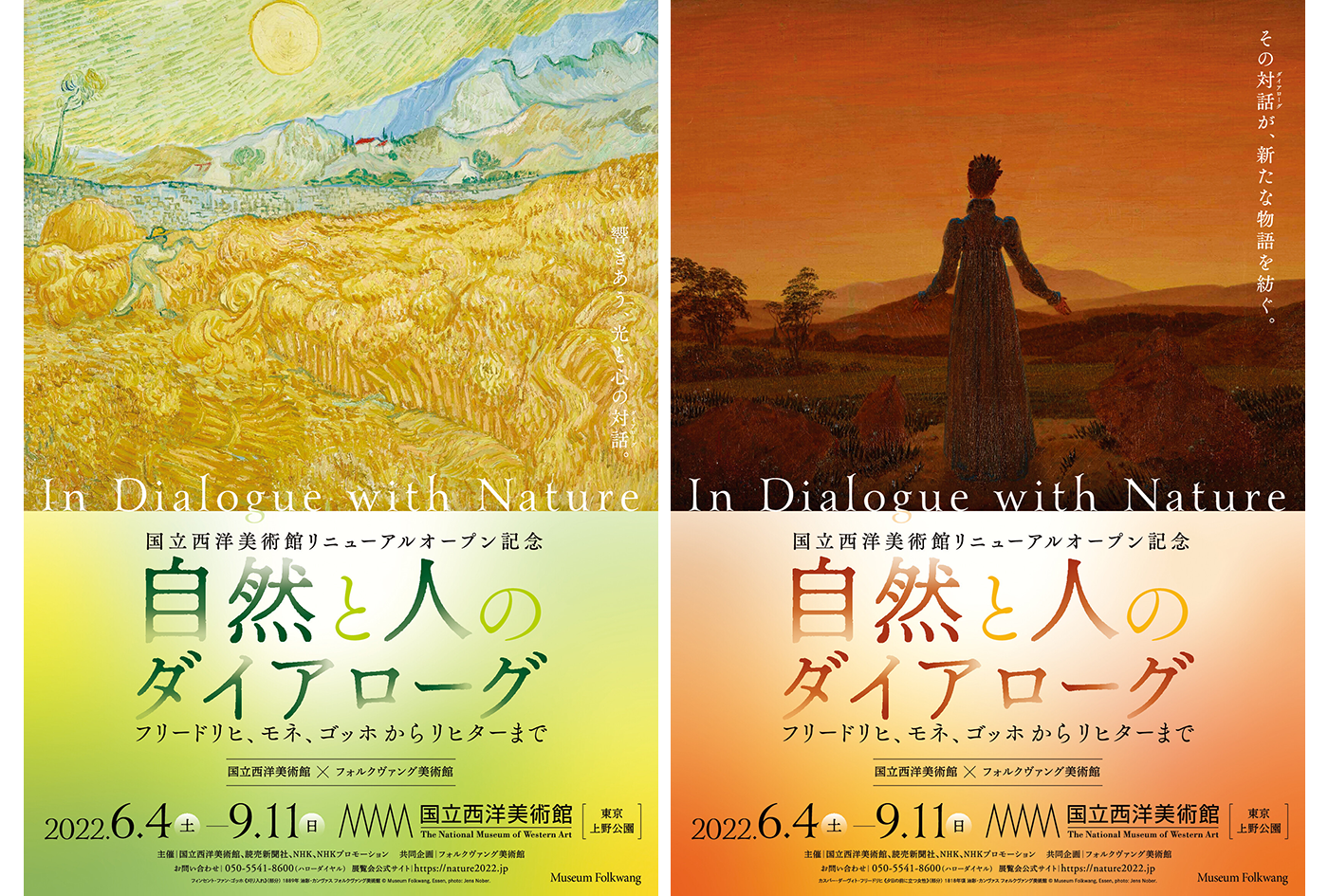 In celebration of its reopening, the National Museum of Western Art is holding “In Dialogue with Nature From Friedrich, Monet and Van Gogh to Richter” from June 4 (Sat) to September 11 (Sun), 2022.

This exhibition is a unique collaboration project that review on the development of born out of the dialogue between nature and humankind from the collections of the Museum Folkwang in Essen, Germany which is celebrating its 100th anniversary, and the National Museum of Western Art.
You will be able to enjoy the development of modern sensibilities and artistic expressions of nature through more than 100 paintings, drawings, prints and photographs from German Romanticism to 20th century paintings, with a focus on Impressionism and Post-Impressionism.

Both the Museum Folkwang and the National Museum of Western Art were founded on the private collections of Carl Ernst Osthaus (1874-1921) and Matsukata Kōjirō (1866-1950), who lived during the same period.

The Museum Folkwang was founded in 1902 in Hagen by Karl Ernst Osthaus, who was born into a banking family, with the idea that an industrial city needs an art museum. After Osthaus’s death, the city of Essen, near Hagen, purchased his collection with donations from its citizens and merged it with the city museum to form the new Museum Folkwang. After that, the museum was sometimes difficult to operate due to the rise of the Nazis and World War II, but today it is known for its excellent collection of modern and contemporary art.

The National Museum of Western Art was established in 1959 to house and exhibit the “Matsukata Collection”, part of the large amount of art collected in London and Paris from the late 1910s to the late 1920s by Matsukata Kōjirō, who headed the Kawasaki Dockyard in Kobe (now Kawasaki Heavy Industries, Ltd.). Matsukata’s purpose in collecting art was to establish an art museum, as a hall of fame for Western art was in demand in Japan at the time. However, after that, it was difficult to establish a museum due to the turmoil of the Great Kanto Earthquake(1923), the financial crisis(1927), and World War II, and it was after his death that Matsukata’s dream came true.

This exhibition introduces European expressions of nature through over 100 works ranging from German Romanticism to Impressionism, Post-Impressionism, and 20th century painting.

Wheat Field Behind Saint-Paul Hospital with a Reaper, a masterpiece of landscape painting that Van Gogh worked on in his later years, is making its first visit to Japan from Germany. In addition, many other fascinating works by well-known artists such as Friedrich, the master of German Romanticism, and Richter, the master of contemporary art born in Germany, are also on display. A new work from the National Museum of Western Art’s collection by Akseli Gallen-Kallela, a Scandinavian artist who is attracting worldwide attention, will also be on view for the first time in Japan.

You should not miss this rare opportunity to see many rarely seen works in Japan, including Manet, Monet, Cézanne, Gauguin, Signac, Nolde, Hodler, Ernst, and so many more.