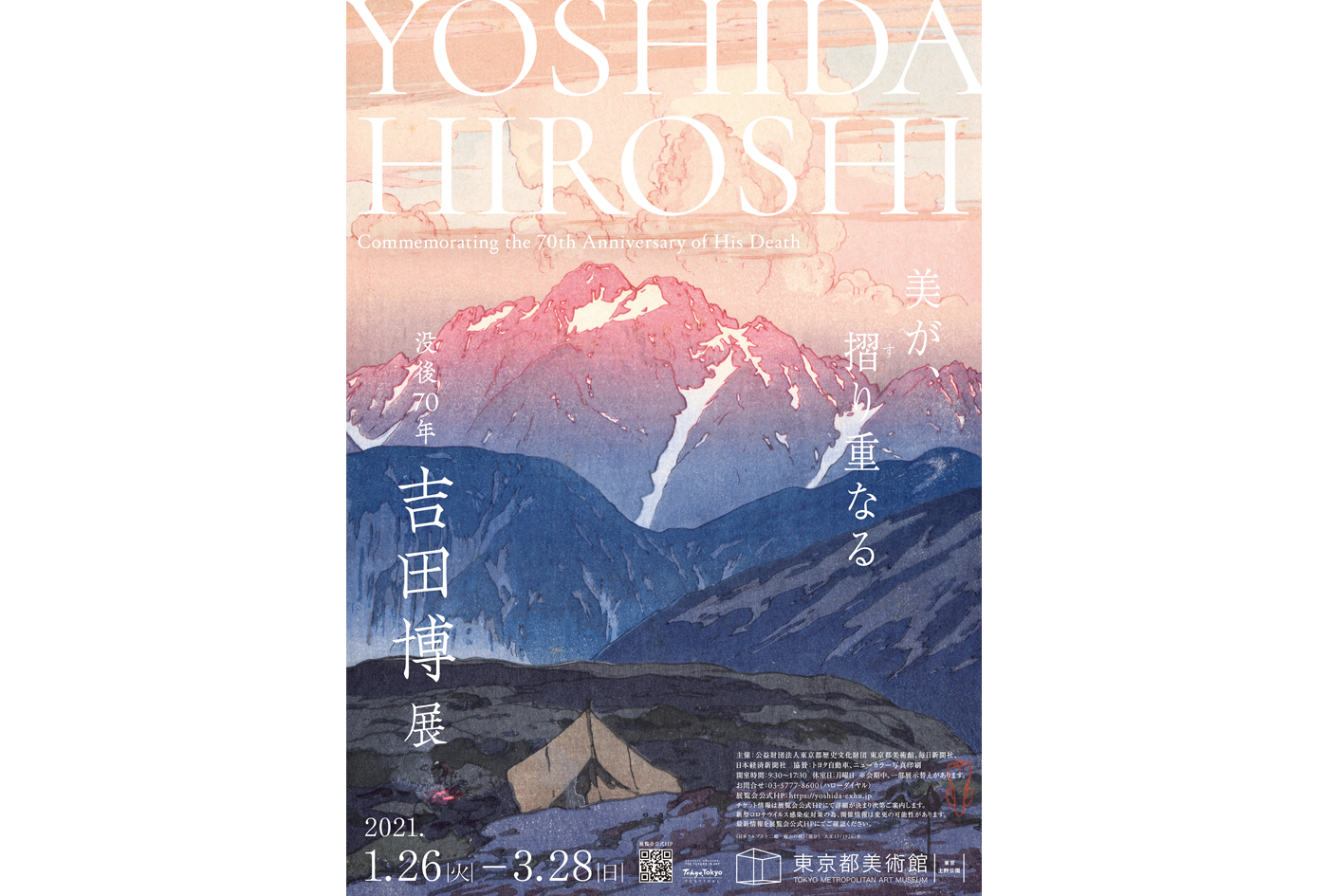 The lyrical sense of color in the prints of Hiroshi Yoshida (1876-1950) is both fresh and nostalgic for people today, and once you see them, you will never forget them. You may be interested enough in the images of the works on the website, but when you actually visit the exhibition, you will be moved by the passion and skill of the artists who try to reflect the essence of nature’s beauty, which cannot be read from the images.

[Outline] Woodblock prints are highly regarded overseas.
Hiroshi Yoshida, whose 70th anniversary of death was in 2020, was a leading landscape painter from the end of the 19th century to the first half of the 20th century. This exhibition presents the full range of Hiroshi Yoshida’s internationally acclaimed woodblock prints, which integrate Western realistic expression with traditional Japanese woodblock printing techniques.

Born in Kurume City, Fukuoka Prefecture, Hiroshi Yoshida showed his talent in watercolor painting from a young age, but in his late 40s he took up the challenge of woodblock printing, breaking new ground.
The works of Hiroshi Yoshida, a fusion of Western color expression and Japanese ukiyo-e techniques, are full of realistic expression and a unique lyrical sense of color, and are highly acclaimed not only in Japan but also overseas. His work is known to have been loved by Diana, Princess of Wales and the psychiatrist Sigmund Freud.

[Works] Woodblock prints that capture the beautiful moments of magnificent nature.
Throughout his life, Hiroshi Yoshida traveled around the world and continued to paint landscapes that captured the majesty of nature as his motif. His sketches of mountainscapes and seascapes convey his uncompromising stance of stoically trying to capture the essence of the beauty of nature, for which he was called “eager painter”.
Morning on Tsurugisan, Twelve Scenes in the Japan Alps, is one of his best known works. He was also a mountain climber. Therefore, instead of looking up from below, he spent many months in the mountains, depicting views that can only be seen from the top with his unique composition, a fascinating work captured from the unique perspective of a mountain climber.

In “Glittering Sea, The Inland Sea Series”, the glittering sunlight that changes with time is depicted with precision, and the realistic depiction that is common to oil and watercolor paintings can be seen.

In this exhibition, you will be able to enjoy landscape paintings of various places, from famous places in Japan to views of India and Southeast Asia.

[Technique] Relentless exploration of printmaking techniques and originality of color expression.
Traditional Japanese woodblock prints, such as Ukiyo-e, were produced by a division of labor between the painter, engraver, and printer. Hiroshi Yoshida hired engravers and printers to produce prints as he wished, under his own supervision.
One of Yoshida’s unique techniques is what he calls “betsu-suri,” a technique of using the same woodblock and changing the printing color to show the time of day and atmospheric changes such as morning, fog, evening, and night.

One of the highlights of this work is the exquisite expression achieved by over 90 layers of printing. In addition, you will be able to enjoy a variety of print expressions, such as the powerful oversized version of “Rapids” created using a huge woodblock.