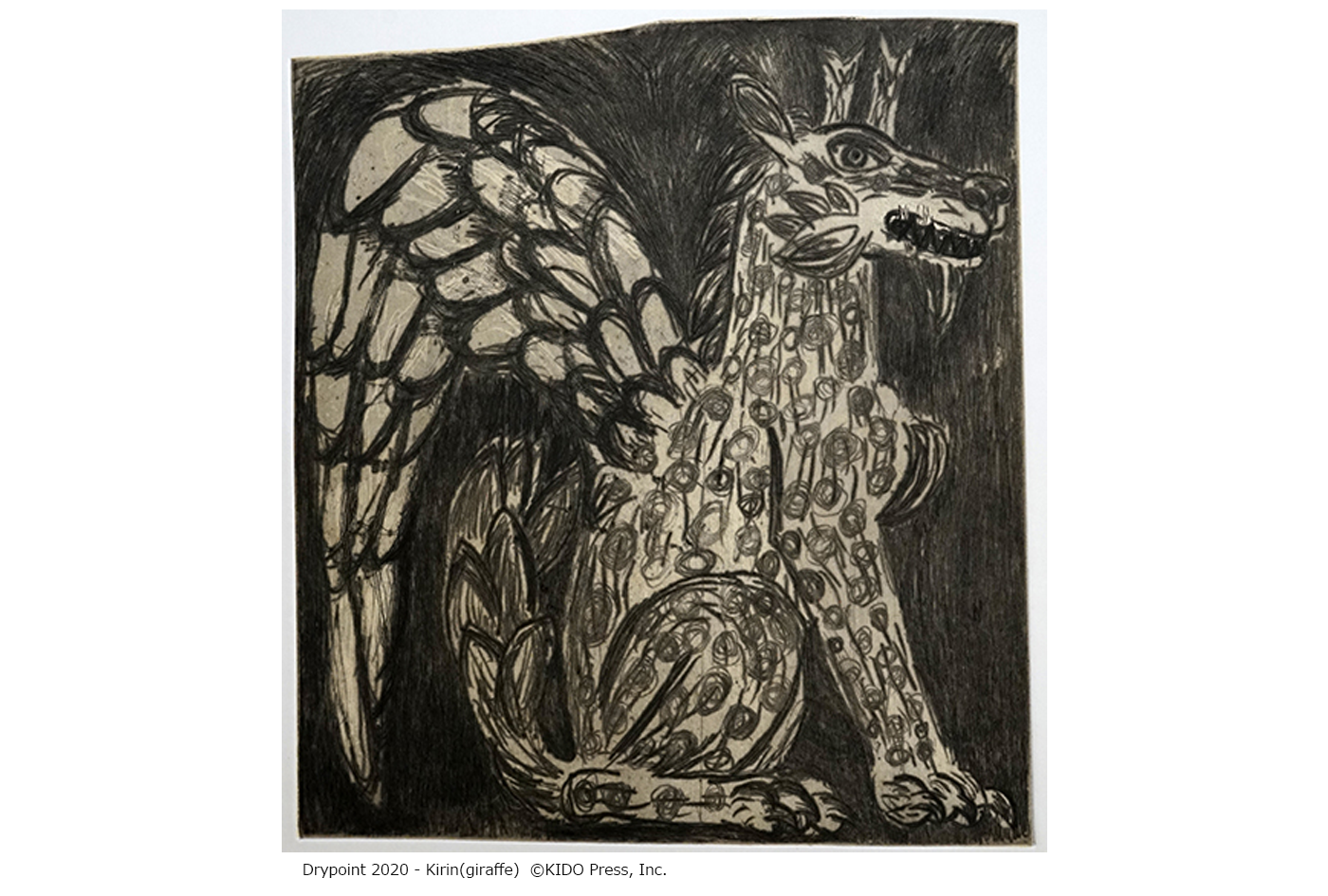 Atsuhiko Misawa Exhibition: Animals – New Drypoints is being held at Gallery KIDO Press. The animals drawn by Mr. Misawa, who is well known for his statues, are vividly depicted with the unique texture of Drypoint print, including creatures in the fantasy world.

Mr. Atsuhiko Misawa is well known for his wood statues with animal motifs since 2000, and has held many exhibitions at museums throughout Japan. In this exhibition, he uses drypoint prints to depict animals, but the expressions on their faces are keeping calm and seem to share the same atmosphere as his wood statues.

Tigers, rabbits, antelopes, lions, birds, etc. that always appear in his work are quietly standing, but you can feel the tension when you happened to meet them in the forest, or you can feel the closeness as if you were living with them as pets. A variety of emotions will arise in you and you will have a very pleasant time!

Other creatures from the imaginary world such as Chimeras, Amabie, and Kirin(giraffe) are also depicted. Their eyes seem to exude a mysterious power, but they don’t strike a pose that shows off their dignity; they seem to be standing like Buddha statues. These works have a mysterious image, but at the same time, they look like animals that are close to you, and the ambivalent fantasy world will spread to the viewer’s mind.

Drypoint is a printmaking technique in which lines are carved directly onto a metal plate and drawn. When you carve an image with a steel needle that is harder than a metal plate, the scraped and raised metal appears as “rolls” on both sides of the line. When you fill the plate with ink, the ink also collects on the back of rolls, so it will be printed as a soft line on the paper that has absorbed it.

Generally, copper is used for metal plates, but this time Mr. Misawa used pewter plates (tin plates), which are much softer than copper plates. This allows him to draw more freely, and the animals are depicted in a myriad of lively, rhythmic lines.

Mr. Misawa commented that while the world was abuzz with COVID19, he spent time alone in his studio and asked himself how his creations would connect with others and society. Right now, we do not know the answer yet.

However, we, the audience of Mr. Misawa’s works, have also experienced a life of refraining from going out and staying indoors by working from home, enough to make us lose sense of what day of the week it is. In such a situation, it would be a relief to encounter Mr. Misawa’s works, which are created with the same stance as always. At the same time, what you feel when you appreciate his works will be an act of confirmation of where you are.