Special Exhibition “Momoyama : Artistic Visions in a Turbulent Century” is now being held at Tokyo National Museum.
This exhibition looks back over 100 years, from the end of the Muromachi period to the early Edo period, when warring feudal lords such as Nobunaga Oda, Hideyoshi Toyotomi, and Ieyasu Tokugawa fought all over Japan to unify Japan. It can also be said that this period was a time when the Japanese came into contact with Western culture through the trade with Spain and Portugal, and other means when their previously Chinese-centric worldview and values were greatly shaken and diversified.
One of the main features of this special exhibition is that it allows visitors to see all of the 230 or representative works in a variety of fields that were born during this period of great change in Japan, which would normally require traveling around the country to see them all at once.
What did the power lords want, and how did they change during the turbulent century? It is worth more than just tracing the history of art to “experience” the magnificent surge of the times through a group of works that are not fragmentary.

It is a “Momoyama art textbook” that tells about the era of change.
The Azuchi-Momoyama period in political history covers 30 years, from 1573 to 1603. However, in art history, the characteristics of Momoyama art can be seen for about 100 years from the end of Muromachi to the beginning of the Edo period, so it is common in Japan to make this the Momoyama period.

In this special exhibition, you can verify what the art of this era inherited and how it influenced posterity with gorgeous works associated with celebrities such as the Powerlords, Masters of tea ceremony, and cultural figures. Here you’ll find a series of works you’ve often seen in Japanese history and art books. It is important to know the work as “information” on paper or on the screen, but you may also feel something because you see the real ones.

What did the power lords seek in beauty at the extremes of gorgeous and austere?
As a prologue, this exhibition begins with a wall painting ” Scenes in and around the Capital (Uesugi Version) “, which depicts the city’s changing appearance from the end of the Muromachi to the beginning of the Edo period. Eitoku Kano, who painted this wall painting, became a mainstream painter for the power lords at the time, from his grandfather Motonobu to his grandson Tanyu, and showed the gorgeous Momoyama style with the works of their rivals such as Tohaku Hasegawa, Yusho Kaihou, and Togan Unkoku. Also, genre paintings depicting customs and life scenes in the early Edo period show the same trend in the Momoyama style. 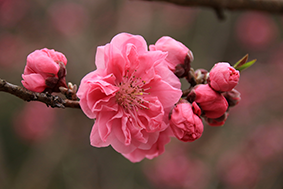 On the other hand, in contrast to these opulent and gorgeous works, there is an austere aesthetic sense of Wabi-Sabi, as if confronting the inner self. Its aesthetic sense can be seen in the tea ceremony utensils associated with Rikyu, as well as in Momoyama tea ceremonies and flower vases of excellent design, such as Shino, Oribe and Kiseto, and in the “Pine Trees(a partitioning of a pine forest),” an ink-wash painting by Tohaku Hasegawa.
The interest in the fact that the power lords loved both of these extremes of beauty deepens in the presence of original works of art.

In addition, Tohaku Hasegawa’s ink-wash painting “Pine Trees” will be exhibited from October 20th to November 29th, but another content introducing its charm and mystery will be released simultaneously at this museum. It is a VR program “Pine Trees: Tōhaku’s Masterpiece in Ink” and can be seen at the museum theater on the B1F of the Toyokan (English audio guide available). It will be more fun if you watch it together with this exhibition.

The feelings of the power lords and us: Expression of support from the Momoyama period
Most of the 100 years of Momoyama art was in the Warring States period. What were the power lords thinking in the days of warring? Perhaps how will they survive? Rather, how do they die? It would not be surprising if they lived thinking about it. In this exhibition, visitors will be able to experience the spirituality of these power lords through the works associated with armament such as armor, swords, and vest worn over armor (jinbaori) used by them.

Armament has two aspects: practicality as a weapon for fighting, and sociality as an external manifestation of social status and power through unique decorations and designs. What catches our eye in this exhibition is the sociality in which each individuality stands out.
In the first section of this exhibition, “Ichinotani Style Helmet with Iris Leaf Design” is exhibited. This work is said to have been given by Hideyoshi Toyotomi to the ancestors of the Shiga family of the Okazaki clan in Mikawa Province, but you will never forget its eccentric form. Sure, the power lords can show off their position with this helmet, but it’s so prominent on the battlefield that it seems easy to be targeted by the enemy.
Vests were worn over armor (jinbaori) are decorated with designs that contain a wish for longevity of military fortune, and some of these pieces come in colors that would look stylish in a modern city. Some of these pieces have European-inspired designs with embedded bird feathers, and you can see the influence of Western culture, one of the characteristics of this period.

Modern society is also undergoing drastic changes, but it is not possible to easily compare our state of mind with that of the power lords who lived in the war-torn world. However, when we see these elaborate and unique armaments, we feel that the power lords are not afraid of death and have pushed their aesthetic sense to the fullest extent as if they are expressing their support to us from the distant era of Momoyama art.
Also, the fact that the power lords sought beauty precisely in such a difficult period makes us think again that beauty = art is not something you can live without, but something you need to live for.