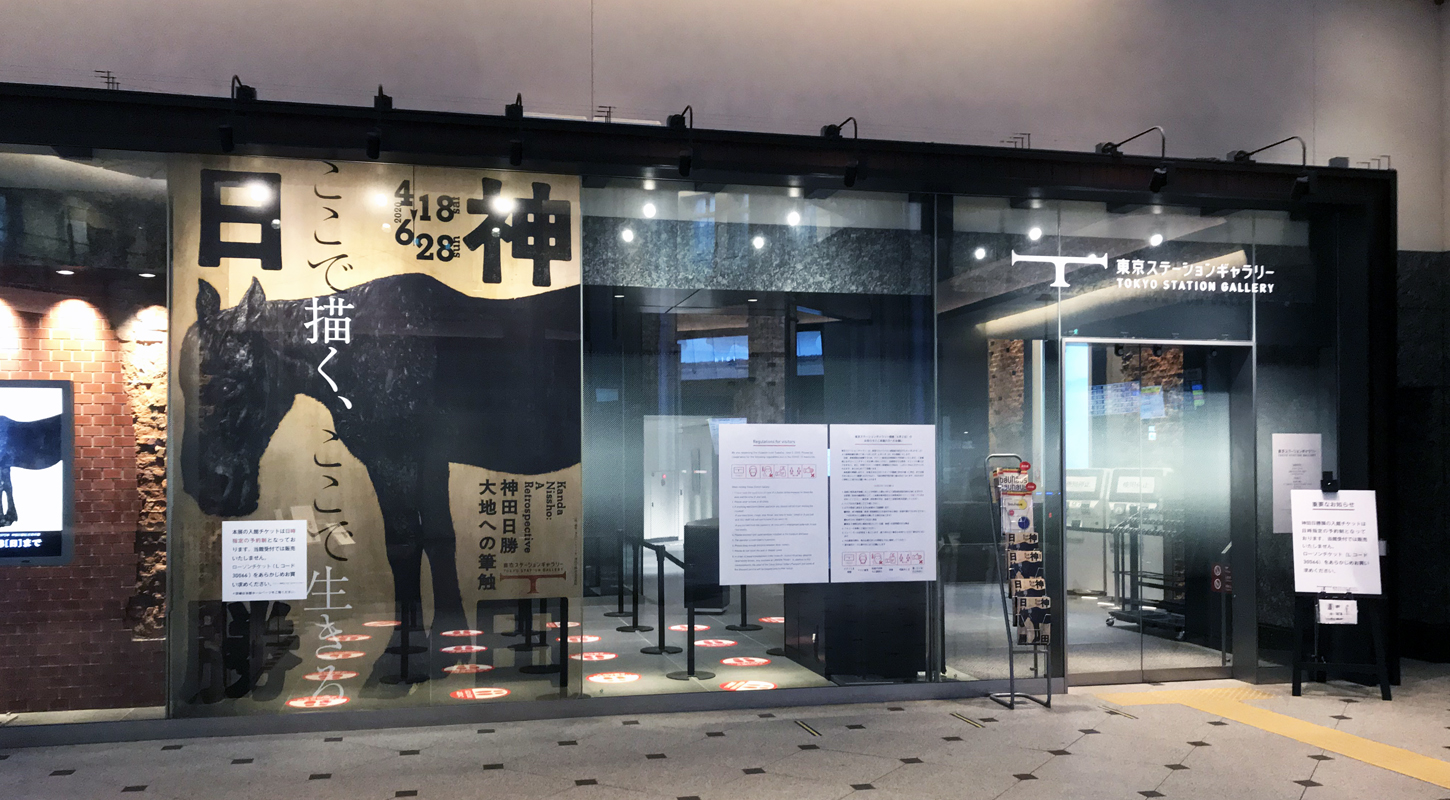 After you see it once, you'll never get the image of a "half horse" out of your head.

Nissho Kanda (1937-1970) was a farmer and painter who succeeded in Hokkaido. His solo show, held at Tokyo Station Gallery from June 2 to June 28, 2020, was a retrospective exhibition that traced the transition of his painting career divided into four periods. I think he wanted proof that he was alive through them, not the things around him or his life. I felt that the symbolic work as a living proof is his posthumous work and his masterpiece, “half-body horse.” I enjoyed the trajectory of the creation, which is short but profound.

“For me, painting is the same as excretion.”

Kanda was born in Tokyo and evacuated to the town of Shikaoi, Hokkaido at the age of eight to avoid air raids from the U.S. military during the Pacific War. He commenced farming there, and started oil painting by himself and was active as a representative painter of Hokkaido. However, he died at the age of 32 before his career as an artist had reached its peak.

He painted oil paint on plywood with a painting knife and trowel, and his powerful, finely chiseled brushstrokes create a unique matiere. Many of the motifs he paints are horses, cows, and people working in agriculture.”

“For me, painting is the same as excretion, I guess. If you can’t hold it anymore, then you’ll let it out, perhaps just like that.” These words from Kanda left a lasting impression on me. For him, if he was alive, he would naturally want to create work, and that is why I felt that Kanda’s works are proof that he is living in the present. 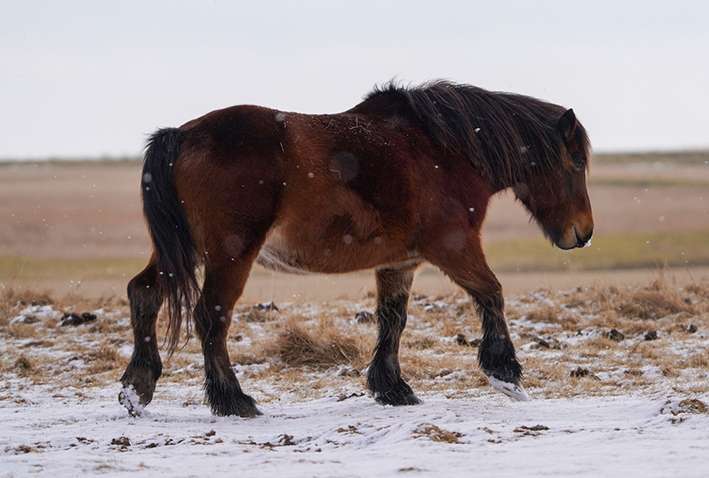 I saw Kanda’s struggle from beginning to end.

In this exhibition commemorating the 50th anniversary of his death, I was able to see four periods of his life, moving from his early days as a painter to “Wall and Man,” “Studying the Horses and Cows,” “Studios / Interiors” and “Experimenting with the Informal Style.” The works of other artists who influenced Kanda were also displayed side by side, which allowed me to think about his struggle to find his own style and what he wanted to paint based on his references.

The motif painted by Kanda is different in each of the above four periods. However, it is consistent in that he describes his everyday life. Kanda himself hated being called an “agricultural painter” and said that he cultivated and created. I think agriculture was only a part of his life.

However, since the horse motif appears in all of the periods, we can assume that horses were especially beloved by Kanda, as they were his partner in earning his daily bread and living. ”

The work “House,” which was selected for the first time at the All Hokkaido Art Association Exhibition (ZenDouTen) in 1960, is painted in three colors: white, black, and red. To me, it looks more like a “crumbling hut” than a “house. ” The composition of the painting is such that the lines of the log-framed walls naturally invite the eye to look at the door of the house, and I felt that I could see the invisible sight if I opened the door. There is an image of the harsh pioneer life that comes to mind, like snow falling on the back of a child sleeping in the house on a cold winter night.

The leaflet says, “Paint in Here, Live in Here, ” and I imagined that the boy Kanda, who decided to live here, must have had a deep love for the nature and lifestyle of Hokkaido and a challenging spirit. 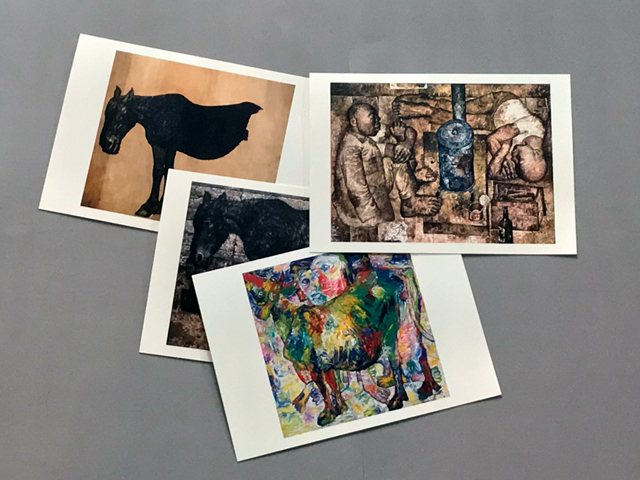 “Half-Horse” that symbolizes all of his creative activities

The unfinished “Half Horse,” the last work on display, symbolizes Kanda’s creative activities in many ways.

The first reason is that horse is his favorite motif. Secondly, Kanda used plywood instead of canvas. As this work is unfinished, the contrast between the grain of the bare wood and the dark color of the horse is very impressive. It’s beautiful and catches the eye from a distance.

And the third reason comes from Kanda’s unique way of painting. Most painters paint the entire screen while balancing the colors, but he paints from the parts with a touch close to completion. This is the point where the painting is unfinished, but you get a sense of a high degree of completion. What’s more, it conveys what the artist has been trying to paint all his life, even though it’s in the process of being painted. It was a very unlikely and wonderful experience for me, but it was a great finale for the exhibition. 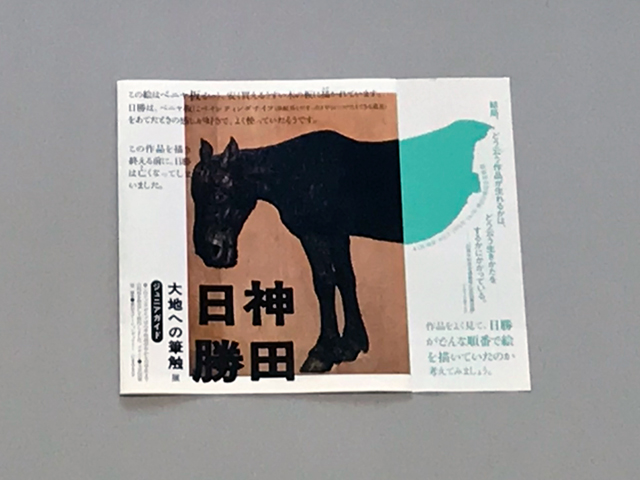 Most of the museums in Tokyo were temporarily closed due to COVID-19 from the beginning of March to the end of May. Therefore, it was the first time for me to appreciate art after 70 days. I almost went crazy that as the stay home and telecommuting continued, I lived my days isolated from society and didn’t immediately know what day of the week it was. Still, the moment I stood in front of the first piece in this exhibition, I felt like I had regained 100% of the routine and sanity for me. I was encouraged by Kanda as we enter a new era of “With COVID-19” and “After COVID-19!” 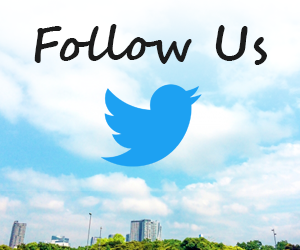